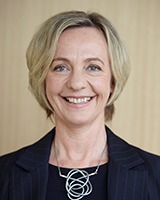 Organisations and the Mature Workforce; Sustainable Wellbeing in Later Life

Marian Baird AO is Professor of Gender and Employment Relations, , Head of the Discipline of Work and Organisational Studies, and Co-Director of the Women, Work and Leadership Research Group in the University of Sydney Business School.

In 2018, Marian was appointed as a Pro-Chancellor of the University of Sydney and was also named in Apolitical's Top 100 Most Influential People in Gender Equality list. She was awarded an AO in 2016 for outstanding services to improving the quality of women’s working lives and for contributions to tertiary education. She is one of Australia's leading researchers in the fields of women, work and family. Marian has received numerous grants from business and government to study gender equitable organisational change and work and family. She has contributed to a number of government advisory boards and reference groups relating to parental leave, gender equity and sexual harassment in the workplace. In 2017 Marian and colleagues edited a ground-breaking book, Women, Work and Care in the Asia Pacific, and she is currently a CI on the ‘Investing in Women’ project being undertaken in the Philippines, Indonesia, Myanmar and Vietnam for Australia’s Department of Defence.